Start: 126.92 Spur to Mike Herrera Road
End: 141.13 bush camp
Fitbit: 34,202 steps
.
We woke in our partially roofless cabin a bit late to clouds falling in to the room. In the middle of the night I switched the alarm from 5 to 6 and then my phone must have promptly died.
.
Even with the shelter blocking wind, it was damp and especially difficult to get going. Water report was sketchy so I fully loaded up (and filtered) 7.5 liters of water while my fingers got so cold they were painful. 30 minutes of hiking cured that. But fuuuck I need warmer gloves (been wearing fingerless bicycle gloves).
.
A note on the weather. Every night except two nights ago has been FUCKING COLD. I’m snug as a bug in a rug in my zpacks 10 degree sleeping bag, but getting up in the morning has consistently been a real bitch.
*Fucking cold == thirties or low forties.
.
The weather during the day has usually been pretty cool also. When the sky is clear it can be 50 degrees out and yet you are scorching in the sun. It is an odd I’d of baking and freezing at the same time.
.
I helped the women with their water and we headed out. We punched out a fast five miles and took a forty minute break.
.
My “German Pack” is two women. Michaela is from Germany, her name is near impossible for this American to pronounce, and so someone gave her the trail-name Bingo. She wants to finish by mid September so that she can return home to Bavaria and train as an ambulance driver. Stefani is from Switzerland, “but she isn’t German!” You say… Well, her native language is a dialect of German. She is a psychiatric nurse, and like nurses in the states is in high demand. Enough so that she was able to take 9 months off to travel the world and hike the PCT.
.
Both women need a day or two to let their feet heal. I need a day off to let my body catch up to the abuse I’ve been putting it through. How I have managed two 20+ days with zero blisters at my lack of a fitness level is a minor miracle. Yay we hit Idlewild tomorrow!
.
Anyway, we hiked a few more hours and took a break for lunch and a supposedly 15 minute nap. I woke myself snoring and let the women sleep in the glorious sun for a total of 35 minutes. A few hikers passed and gave us a wave and then they woke up in unison. Time to grind more miles.
.
We stopped at one point so that Stefani can deal with her blisters, but she was running out of bandages. I broke out my leukotape and some sterile bandages and I think we got them wrapped up a lot better than they had been. Her feet are Swiss cheese *smirk*. A zero or two in town where we can peel off the dead skin, and let them dry out while staying clean will help a lot.
.
At 14 miles we ran across a patch that is barely large enough for our three tents, and I cooked up an extra large meal. 10 miles to town and real food tomorrow!
.
Hummingbirds in camp are buzzing my tent periodically. They sound a lot like the bullfrogs on gross road. Can hear a motorcycle and dogs barking off in the distance, not sounds expected on trail.
.
Forgot the sunrise shot again darn it! Not too many photos/media today. 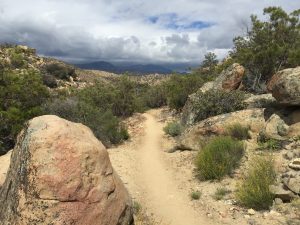 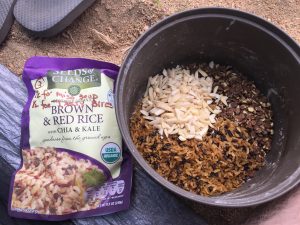 Holy crap, a bird just landed on my tent.