Novel (Peanut), her husband Armand, and her sister Kitty run the Holistic Spa in Wrightwood. They charge hikers $10 to spread their sleeping bag on the floor, access to a shower and laundry. It gets a little nuts with all the new people every day, but these guys are doing it as an act of love towards their fellow human beings. They made sure I had an Epsom bath three days in a row to help me deal with my medical issues. I have nothing but love for these people. Hikers headed to Wrightwood, give them a call!
(760) 249-6600
.
After spending five nights in the holistic spa, it was time to get back on trail and see if anything happened. I set out with Sugar Rush, and we headed for the mountain Baden Powell. We had a few miles to warm up, then instant switchbacks. The mountain is basically 3000′ of pure switchbacks. I hit my stride and felt really strong until the moment we set camp with others.
.
Of course… Two guys had a fire going. In the middle of the night, the wind kicked up something fierce, and brought the embers back to life blowing them everywhere. Awesome.
.
When I posted about it on Facebook the next day this is one of the responses I got:
Amy Deaver – Wrightwood CA
Living on the other side of those hills and in a wildfire area – we’ve been evacuated 3 times; watched fire burning 1000 feet from our home; had hot shot fire crews from all over race up our street, move all items that would burn around our him, trim our trees and work endlessly to save houses; watched aircraft circle in 40 second passes to drop water time and time again to get the fire slowed; had fire crews stay in our area for however long it takes to work and put the fire out; had the neighbor who owns 10 acres of wildlands work with the forest service to helicopter out trees and cut a fire road in to help keep us safe; will never have open flames in our own backyard and we ask anyone who smokes to go out front and make sure it’s out because we’re a bit terrified; ask anyone up in this mountain town how terrified we all are of fire! Don’t be the one who let’s this happen to your trail angels!
.
So yeah, w.t.f? 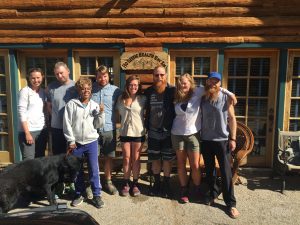