Day 21: Have I really been doing this for three weeks?

Day 21: Have I really been doing this for three weeks?

.
Cowboy camping lends itself to waking up eaaaarly. We got up and were moving by around 6:30. It turns out that tons of people camped within the next few hundred yards. We were the first up, and waded through a plethora of tents. Almost everyone was awake and getting ready. Climbing up a hillside and then turning back so we were above the camps, it looked like half of them were already moving.
.
I crested the mountain to look down with a more than 180 degree panorama of the valley below. At the same time it was obvious that today would be a Scorcher, and it was nice to be headed down the serpentine path, back and forth and around and to the next lower summit with a fabulous view until I finally ended up in a pretty yet short canyon which spilled out abruptly onto highway 15 and the not even town of Cajun Pass.
.
Everyone immediately headed to McDonald’s and parked it there. I was there 6-8 hours hiding from the sun. I finally emerged with some abdominal distress, because hey – hello captain obvious, McDonald’s.
.
I finally emerged and switched venue, hung out at a chevron and bought two subway sandwiches for $10! Always get the deal baby! The lady there was putting massive amounts of vegetables on it and with the insides of the bread scooped out they were pretty sick sandwiches. I gobbled the first and saved the second, flattened in my pack, for later.
.
Blaze and Twang were interested in hiking out, and as we thought about going I spotted a HUGE California Nightsnake wandering around the 5-10 of us sitting around. We pretty much all watched it explore our domain with fascination, until a local picked it up and walked it down by the river where it’d find more food.
.
We hiked out pretty late, 7:30ish and were immediately surrounded by some pretty dramatic sandstone formations until it got dark. Part of Blazes name comes from her pace… She is definitely a trail blazer! Power hiked up and down and around until 5 1/2 miles out we found a good spot to set camp, share my sandwich, write this, and go to bed.
Low miles, high heat, tons of food. 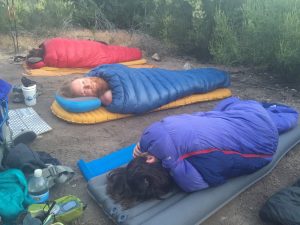 The rest of the day: 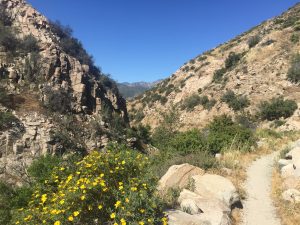 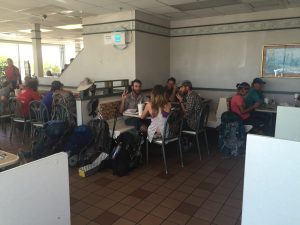 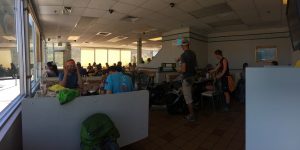 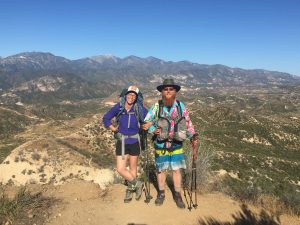 The long decent to Cajun pass
Locals call it a gopher snake, I think it is another California Nightsnake.
More snake