I got up, was about to go out the door, chatting with my friend Shaunne online and invited her to come hiking with me at the last minute.  I picked her up, both of our discovery passes were expired, and since I’m about to go out of town for five months, she bought one.

We got to the trailhead – she estimated the trip would take 4-4.5 hours, I estimated 5.5 hours.  We took the new trail, and except for a lot of blown over trees from the wind storms we’ve been having, it is a very good trail.  Lots of switchbacks and not including near the top it is a steady upward grade.

About two thirds of the way up, I realized I had just taken someone I’ve never hiked with on the hardest trail I’ve attempted in the last five years — maybe the hardest since I did Muir a few times as a kid.  Generally when you don’t know a hiking partners abilities, taking them on a hard hike can be a really bad idea.   I made it clear that either of us can call it and turn the hike around at any time, but — she’s a rock star, and seemed to be doing better than I was — and I was feeling good, if a bit slow.

Near the top, there is maybe 100 feet of elevation in a talus field, or snow field, take your pick.  It looked pretty intimidating, but I wanted to see what it looked like once we got over the clump of rocks at the top. We followed the tracks of other people in the snow to avoid post-holing.  The snow was pretty melted.  After the talus field, it was a fairly vertical dirt track,  Shaunne must be part doe – she was still happily bouncing up the trail, for me it was all about turtle gear… slow and steady.

I brought 3.5 liters of water, and started on my third liter near the top.  Another hiker was barely standing up and out of water so I gave her about half a liter.  and then — the top!

Mailbox has stunning 360 degree views.  How stunning you ask?  So stunning that photos and words don’t do it justice.  The apron around the top still had snow, but nothing compared to even a week ago.  I kind of love how my belly is blatantly hanging out in the photo of the two of us — because that sucker is going away soon.  We ate gorp, pet dogs, signed the register, and recharged for about 30 minutes and headed down.

On the talus/snow field, I decided to glissade down, and Shaunne decided to climb down the talus proving she is waaaaay more agile than I am.  I think if I had gone that way it would have taken me twice as long.  While sliding on my butt down the snow on a track where others had done the same, I saw the glint of some trash in the snow and stopped on top of it in order to hike it out.  I buried it about 4 inches down in the process and for a moment thought I must be digging in the wrong spot until — PRESTO! an iPhone – still powered up.

We weren’t able to unlock it, but every time someone called I tried to answer — but couldn’t hear their voice — phone might have been damaged.  We were writing down the names of people contacting the phone with the intent to try to look them up when we got back in.

The trek down was a bit of a slog.  we started out fast, but by the end were starting to need breaks more and more often.  The altimeter app on my phone doesn’t work so well, and the bottom of the trail was a surprise as a result.

Shaunne found a note from the phone owner — called them — and arranged to return it.  WIN!

We stopped at Fatburger for the after hike dose of salt and protein.

Final time on the mountain:  7.5 hours!  Whoa – clearly neither of us is very good at estimating how long a hike takes.  🙂  Good trip, I recommend it to anyone. 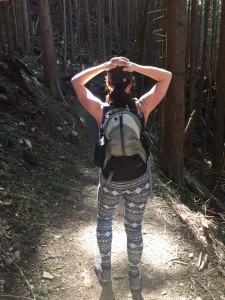